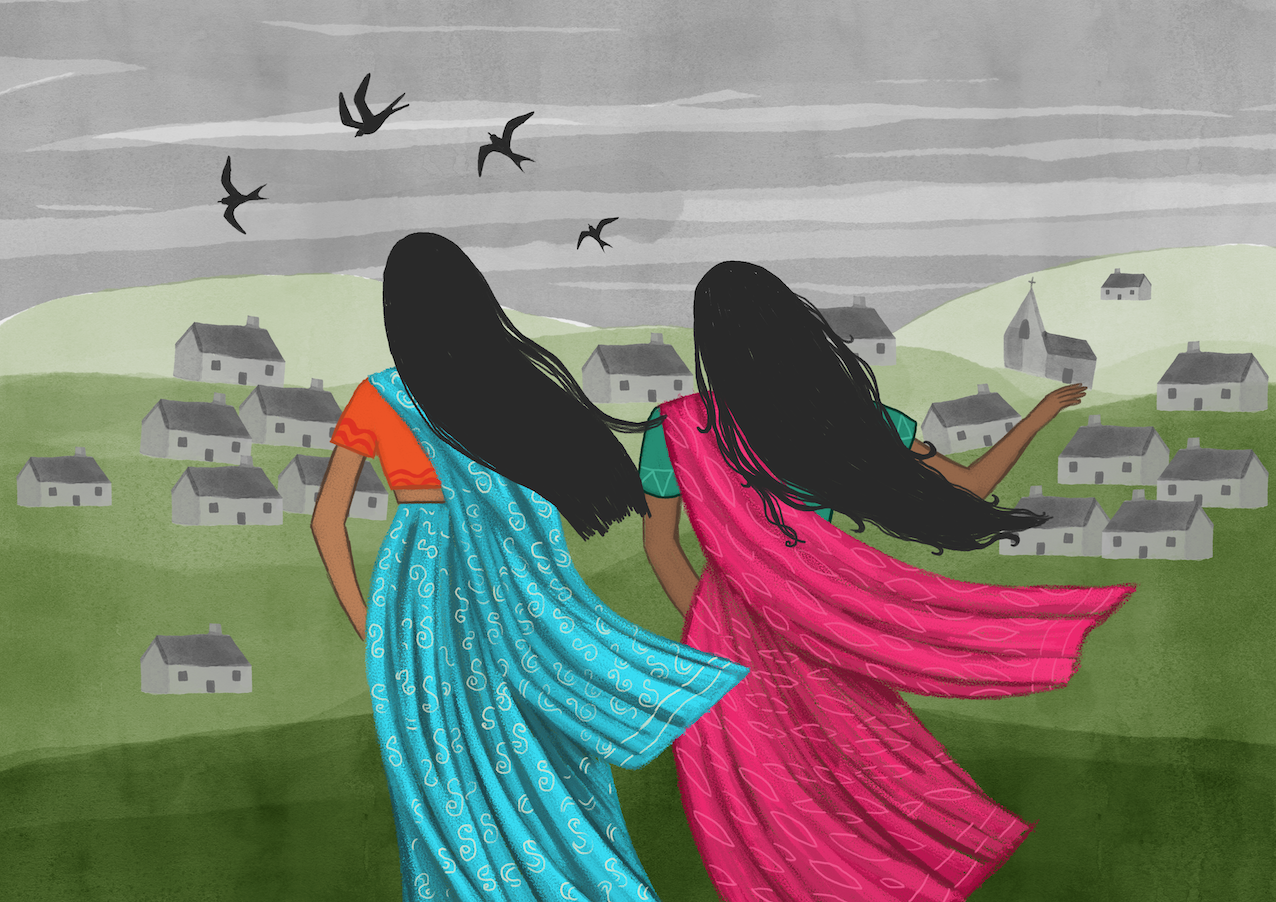 It was the headmaster at school who had pointed out to me that the word home in the English language was not the same as the word house.

“Where you live is your home and not your house,” he had said, “what is home in your language?”

His words had touched a nerve and made me think. In Gujarati, house and home are both  called ghar – meaning abode. There are many words for abode like ‘makaan’, ‘nivas’ ‘sadan’ but the most commonly used word is ghar. It had never occurred to me that house and home were not the same. Until 1972 my house in Uganda had also been my home – it was a place where I thought I belonged and that place belonged to me.

My mother had looked at our three-bedroom council house in Penrhys with dignified delight.  We had lived in a 1920s semi–permanent house with a corrugated iron roof in Uganda and here we had been given a house with brick walls and tiled roof. Nine of us lived in this house and it felt like there was not enough space and we were living on top of each other.  Our doors and windows were more often shut than open. If nothing else, it kept the cold out. Meanwhile, our house in Uganda had bigger rooms, open doors and windows, where our living space spilled over into the courtyard, the veranda and neighbouring homes.

In the summer of 1974, my sister Madhu came up with an idea. We were sitting upstairs in the bedroom we shared with two of our other siblings. She was looking at the top of the  wardrobe, when she said –

“Let’s get dressed in saree.”

“I don’t want to,” I sighed, forcing air out of my mouth.

I was uncomfortable with my adolescent body and had decided I was not going to wear any girly clothes. I was resentful of the breasts that had suddenly appeared on my chest but was relieved that they were not as big as Diane Jones’s breasts. Not that Diane minded. In fact, all the school girls in my class were envious of Diane’s breasts. I could not understand  why the Welsh girls celebrated becoming a woman. For me it was a curse.

I watched my sister drag the blue suitcase down from the top of the wardrobe onto the  floor. She wiped the dust off the lid on which had written on it ‘K K JOSHI’ in white emulsion paint in a child’s handwriting. She clicked the two locks sideways and opened the lid. Forgotten smells of mothballs and sandalwood poured out of the case. Memories of the middle room and the peacock wardrobe in our house in Uganda, in which Ba stored her best saris, came flooding in my mind. I got off the bed and sat on the floor and watched Madhu taking out one sari at a time.

‘I have got one,’ she cried out and took out a purple chiffon saree with magenta flowers trimmed with gold threads and sequence. She jumped up and went by the window and laid out the sari against the glass. Beams of sunlight darted through the chiffon silk and sprayed the whole room with pink flowers. Waves of pink shadows fluttered on the white bed-sheets and the walls. The flowers landed on the floor and decorated the yellow carpet like rangoli. The gold stars shimmered and danced on the walls. The shimmer stung my eyes like shards of glass. The thought of Madhu looking prettier than me helped me shed my tomboy fantasies as I dived into the blue suitcase and started rummaging through it with enthusiasm, taking one sari out at a time, looking at it and then discarding it on the floor.

I pulled out a heavy purple and black sari that I had seen my mother wear at the last wedding we had attended in Uganda. The deep purple and black rayon fibres were inter weaved together, creating a see-through patterned net effect. I placed it against my nose, relishing the smell of mothballs and flung the sari open over the yellow carpet, wiping out any trace of the pink flimsy flowers that Madhu had so proudly displayed. It was like a dark night blotting out roses in a garden. I started wrapping the fabric round my waist and inch by inch the yellow carpet was revealed again like the garden at dawn.

The sari increased my waistline three-fold.  “You look like that woman who used to shave her face,” Pankaj, my brother, walked in the room. He was twenty years old and had just given up his studies to start work in a local factory. Pankaj was one of the cleverest boys in our town back home. Everyone thought he would definitely become a doctor. My father had sent him to the UK to do his A-Levels in a private boarding school only eighteen months before we were expelled from the country. When we came to Wales out of the blue, his studies got disrupted and he didn’t get the grades that he had expected to get. Disappointed, he quit his studies and started working in the Leiner factory in Treforest, feeling the pressure of being the oldest son whose responsibility it was to get us out of poverty.

“Padeeee,” Madhu pointed her index finger at me calling me baby buffalo which is what we used to call the lady who used to shave her face.

“I was talking about you,” Pankaj quipped. I clenched my teeth and giggled.

“The girls are getting old enough to be married off,” Motaba came and stood at the door, smiling a toothless smile.

“Right I am not dressing up,” I threw the purple sari down and squatted on the floor.

“Don’t listen to him,” Madhu pushed Pankaj out of the room.

“You girls are ‘chaphoo’ just like your mother,” Motaba clicked her tongue and placed her  arthritic fingers on the hair which projected out from her chin looking at the pile of saris on  the floor. We looked at her, rolled our eyes and sighed.

‘This one is nice’, Madhu handed me a pink sari with gold leaves painted throughout its length.

“I wore this one at the Janoi celebration we had in 1968,” I placed the glossy material on  my head and it slid down and lay on the floor like a dead flamingo.

“I wore an ordinary dress at the Janoi,” Madhu reminded me of how I used to adore dressing up in grown up clothes when we were children and how she hated it.

“Found one,” I pulled out yards of ice blue satin silk and held it close to my chest in a hug.  Madhu and I put on our blouses and petticoats and wrapped our saris around our waists  leaving the final yard of material for the palav, flinging it on top of our left shoulders. Then we ran downstairs kicking the silk fabric with our feet with each step we took.

“You both look beautiful – so grown up,” Ba peaked her head out of the kitchen.

“Look Bapuji,” Madhu dragged me into the sitting room where Bapuji was sitting on a chair.

Madhu and I strolled around the circular road, Heol Pendyrus, which surrounded the council estate where we lived. As we walked past houses on the street, net curtains moved and Welsh eyes looked at us with intrigue. Children shouted at us, young girls looked at us in admiration and young men gave us shy glances.

We walked past the boiler house and stood at the edge of the hill so we could see the valleys below light up as evening started eating into the daylight, our saris flying in the air like giant butterflies.

I remember that day so well. It was the day when we finally opened our suitcase and let out our old selves and set them free, free to fly around a new land where we now lived. A land that we hoped would one day become our home. 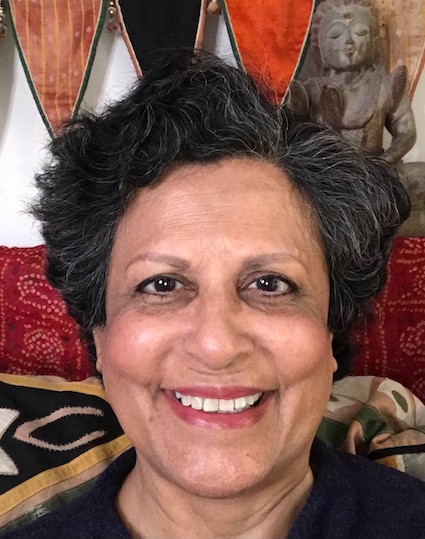 Chandrika Joshi is a specialist in special care dentistry and is a winner of the Ethnic Minority Welsh Women Achievement Award . She is a story teller, a Hindu priestess and a new emerging writer. She won a place on the Rhys Davies emerging writers course with Literature Wales in 2021 and is interested in writing myths and writing from life.

Through the From Now On project, Chandrika received mentoring support and critical feedback from Durre Shahwar, Co-founder of Where I’m Coming From.