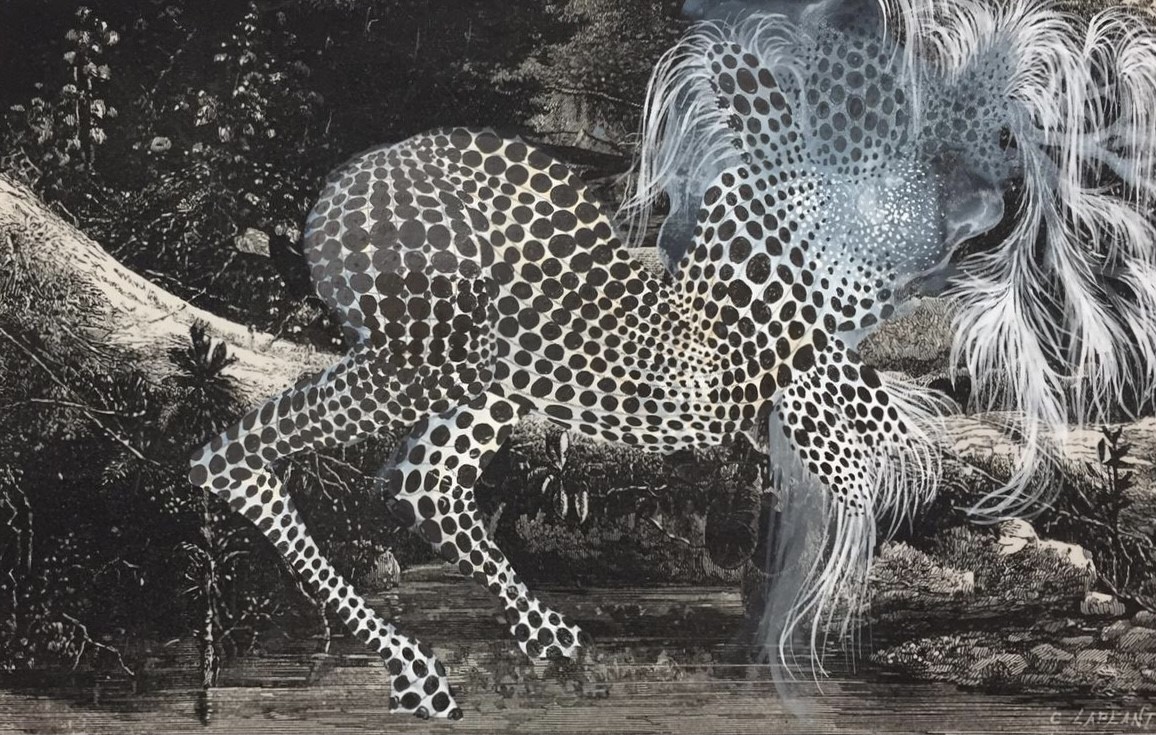 At the edge of a deep, dark forest there lived a zebra who had spots not stripes.

One day, on the soft afternoon air there blew something strange.

The zebra began to tremble with unease as blue-black, shiny feathers started sprouting from her scruff.

The feathers grew longer and longer, reaching their fingers into the tree canopies above.

When the growing ceased, the feathers began to droop down to form a cloak over the zebra’s back.

The feathers were heavy, and unlike those of the birds that swooped above, appeared coated in a slick oily residue.

The zebra never ventured into the depths of forest, fearing herself vulnerable to its darkness.

But now she felt exposed by the way her feathers glistened in the light and understood that being seen did not always ensure safety. So towards the dark she trod.

Shrouded by night the zebra wandered, confused and searching for answers.

She came to a lake hidden deep within the forest.

As the zebra drank from the lip of the lake, she saw a woman emerge from beneath her reflection.

The woman was without clear edges. She shivered with the movement of the creatures that swam beneath her, her limbs dissolving into the depths of the lake.

Without words, she spoke to the zebra. “Step into the water,” she quavered.

The zebra felt a kinship with this woman. A feeling blooming from within, that she too was a watery being.

Her hooves glided into the silver lake, turning her spotted limbs blue as they strode.

With each stroke she felt the gentle pull of the water, and the elevation of her shimmering feathers.

Under the cool blanket of the lake her feathers fanned across its surface like lace and propelled her onwards in hypnotising waves.

Submerged beneath the blue, the spotty zebra witnessed a circus of strange undulating creatures.

Creatures with limbs that twisted like vines, and with wings that lit up, trailing fiery blossoms in their wake.

These were curious creatures that lived their lives dancing beneath the still surface of the lake.

As they danced, she noticed that their movements mimicked the gentle, melodic sounds of a harp.

The notes sounded oddly familiar to the zebra, like something she had heard in a dream.

She noticed that some of the creatures had blue spots just like hers, which lit up in harmonic rhythms with the music.

“Wake up,” said the zebra to herself, kicking up earth from the bed of the lake, for she was sure that she was asleep.

But the blue that surrounded her would not recede, and she was propelled onwards in the waves of her feathers that felt as though they had a mind of their own.

So distracted was the zebra by the writhing bodies and trembling notes, that she almost didn’t notice the dark shadow, like a mouth, looming ahead of them in the depths of the lake.

It looked like a patch upon which the moonlight was afraid to tread.

Could it be a cloud? A spray of silt? Or a door into another world?

The spotty zebra started to kick her hooves violently in panic, trying to resist the flow of the water and swim back up towards the light.

But her feathers were like the sail of a ship, forcing her towards the black.

She felt her heartbeat throb in her ears and the whites of her eyes expand beyond their limit as she slipped hoof by hoof into its murky embrace.

Once her body was swallowed entirely, her heartbeat began to echo all about her.

She knew she was no longer near the bottom as she tried to swipe her hooves against the earth.

She realised in fact, that she could not feel her legs beside one another, or the weight of her feathery cloak.

She was floating limbless in the dark.

But what surprised her, as she searched for feelings of dread or terror, was that she felt nothing but home.

All that surrounded her was the gentle thud of a thousand heartbeats.

Durre Shahwar is a writer and researcher interested in subversive texts, images, and themes. She is the co-founder of ‘Where I’m Coming From’, a community open mic collective that features writers of colour in Wales. Her work has been published in various magazines and anthologies, notably: Know Your Place: Essays on the Working Class (Dead Ink Books), We Shall Fight Until We Win (404 Ink), Homes For Heroes 100 (Festival of Ideas). Durre has been a part of Hay Festival Writers at Work and BBC Writersroom Welsh Voices. Durre is currently doing her PhD in Creative Writing at Cardiff University and working towards her first book of autofiction about identity, race, migration. @Durre_Shahwar

Kit Edwards is a writer and arts worker who is currently completing the MA in Contemporary Art Theory at Goldsmiths UoL. She has published reviews, essays and fiction for publications such as Sticky Fingers’ FDBNHLLLTTFHORROR, Femme Art Review, and This is Tomorrow. She currently works at Artes Mundi as the Public Programme Assistant. @Kitelizaedwards